He was the loyal son of the brave and noble King Slugwrath, who ruled Swordhaven before he was overthrown by a tyrannical knight named Sir Alteon. Drakath was, for a time, under the employment of Sepulchure, in which he sought to reclaim his family's royalty by becoming King of Swordhaven. His exact where-abouts were unknown for a long time, but it was revealed he was atop of Mount DoomSkull.

Drakath is the son of King Slugwrath, and the former leader of the Darkwolf Bandits. When Drakath's father was defeated by King Alteon, Drakath tried to reclaim his father's throne. As a result, he made a deal with Sepulchure that if he brought him the white and black dragon boxs, in return Sepulchure would give him the Necrotic Blade of Doom, a powerful Doom Weapon that was said to have the power to conquer all of lore. He attempted this, but failed at the hands of the DragonFable hero and only brought the white box to Sepulchure. Because of this, Drakath didn't recieve the sword.

He later asks Xan, the insane and ultra powerful pyromancer, to destroy Falconreach because the hero of DragonFable humiliated him. This was the start the war. called the Wrath of Xan, which nearly destroyed all of Falconreach.

Drakath later steals the wind orb for Sepulchure. He uses it to defeat the DragonFable hero, but before he could finish the hero off, the orb sweeps him away. He later has to face him again, but the wind orb failed to give him power, thus he was defeated by the hero. As a result he loses the orb.

He then went into hiding and was quiet for a time. As the forces of good and evil squared off in a final confrontation between King Alteon and Sepulchure, Drakath descended upon them and defeated both single-handedly as he revealed himself to them. He had become consumed by the forces of chaos and had acquired immense strength and power. He revealed that with his corruption, he now rules as the leader of the 13 Lords Of Chaos, an organization who's goal is to end the world in chaos and destruction. Alteon lay defeated and distraught, but was shown mercy by Drakath Sepulchure however, was killed by him after conversing that Drakath could never defeat him. He heard the cries of a young woman as what was left of Sepulchure erupted into the sky. It was then that he found out the Doom Knight's secret was that he had a daughter named Gravelyn. Drakath shot down Sepulchure's giant flying Dracolich Fortress, with his daughter still inside.

After that encounter, Drakath then prepared his 13 Lords of Chaos to attack Lore and unleash each Beast of Chaos. When the players end up captured by the Collector, they end up encountering a younger Drakath alongside They Might Be Giants.

Drakath later Chaorrupted the players to become the 13th Lord of Chaos. After the players rebel against Drakath, he ends up slaying them in their form of The Eternal Dragon of Time. Gravelyn leads her forces and the Skyguard to Mount Doomskull where she ends up crashing her Dracolich fortress near the gate. Upon arriving at Mount Doomskull, the players save Gravelyn and fight Drakath, where they have the powers of Death and the Eternal Dragon of Time. The players manage to chop off Drakath's wing as he claims that he doesn't need that wing to destroy the players. Drakath then summons Desolich to him as the players fight the Chaos Soldiers. After the players get Gravelyn onto Stratos' ship, the Skyguard begins to target Drakath as Drakath Chaorrupts some Skyguard soldiers into Chaoruppted Skyguard. Sally unleashes a rebuilt Vordred to help fight Drakath. It does not go well, as Drakath easily defeats Vordred. Upon riding a Chaos Dragon to Desolich, the players fight Drakath again. When Desolich tries to chomp down on the players, they break free as Drakath shoots down a Chaos Dragon. The players then fight their way past the Chaos Dracoliches. During the players's fight with Drakath, he falls into the area where Khasaanda and Escherion's frog form are imprisoned. Khasaanda states to Drakath that he mustn't enter the Chaos Realm. Drakath then kills Khasaanda and Escherion's frog form stating that the Queen of All Monsters must rise upon all 13 Lords of Chaos being killed. After the players defeated a Chaos Warrior, a Chaos Soldier, and a Chaos Bandit, Drakath assumes a secondary appearance and fights the players.

At his new lair at Crownsreach, Drakath is brought out of his slump by his right-hand woman, Cemaros, who advises that Drakath gets his castle a makeover. Voltaire is hired by Drakath and Cemaros in order to do a makeover of Drakath's new lair. The players were brought along with Voltaire because Deady was unavailable. Voltaire presents Drakath and Cemaros with the statue of the ancient deity Shub'hathrys from Necronus which Drakath accidentally awakens. Shub'hathrys goes on a rampage, unleashing Eldritch Parasites and Crawling Oozes as the player work to calm down the Panicking Villagers. After the players bested Shub'hathrys, who regresses back to a statue, Drakath vows not to touch it again while Cemaros states that Drakath will when he unleashes it on an unsuspecting world, which Drakath didn't want Cemaros to tell the players. Voltaire is hooked up with some marketing people to promote his Gothic Castlekeeping service, with Drakath featured in the issue.

In the Mirror Realm, Drakath is the Champion of Order and this world's greatest hero. His 13 Lords of Order are the counterparts of his 13 Lords of Chaos. The player had this confusion when brought over by interdimensional bards, Paul and Storm, to help fight the Mirror Realm's version of King Alteon (who is an insane tyrant with plans to rule the world), who had seized the throne from Drakath's father and captured Gravelyn and the Lords of Order.

Note: This version cannot be killed.

Note: This version is aggressive after respawning. 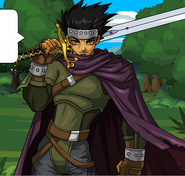 A younger Victoria and Drakath.

The Power of Drakath. 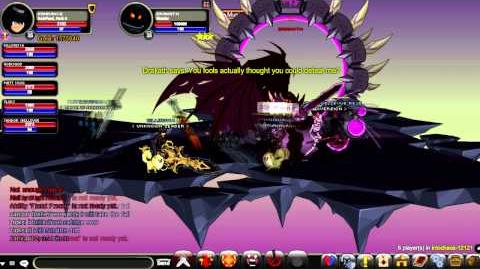